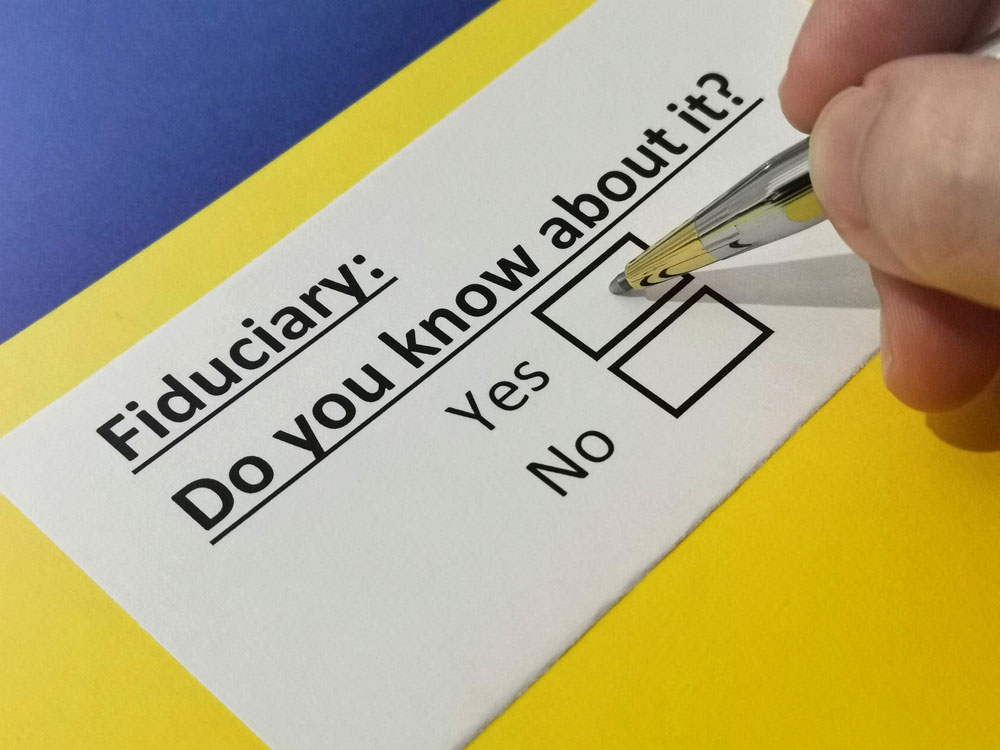 The “Fiduciary” title is one of the most commonly used terms in legal and financial circles. Although the meaning is relatively straightforward, there is often confusion about the exact definition and roles associated with a fiduciary.

A fiduciary can either be a single person or a group of people, such as an organization. A fiduciary’s role is to act on behalf of another person, or people, by putting their needs (often financial and legal) first and acting in their best interest. They have a duty to establish and maintain good faith and trust, which requires that they act both legally and ethically in their role. While the role of a fiduciary can be applied to many functions, including guardianship of children, the term is primarily used in an economic context and, as such, is associated with the following roles:

Fiduciaries have a responsibility to act in both a legal and ethical manner on behalf of the party they’re managing, usually referred to as the “principal.”  The phrase “prudent person standard of care” is often used when describing the role and behavior of a fiduciary, attributing a standard of care associated with a responsible and judicious individual.

There should be no conflicts of interest in this relationship, and financial gain should not be a motive for undertaking the role. Quite often, there is no profit involved in the relationship unless consent is given by the principal beforehand.

Some of the business relationships that include fiduciary duties include:

The two primary fiduciary duties when managing the funds and assets of a principal are:

The role of a fiduciary is to make careful, educated business choices. These choices must be made by analyzing and reviewing all the relevant information with great respect and expertise. The fiduciary must study the principal’s financial status before any decisions on financial plans can be made. If a fiduciary feels that they cannot provide this duty of care, they may consult with industry experts to assist. Still, if they think they are incapable of their role, they should always admit this and relinquish their position in order to act in the principal’s best interest.

A fiduciary must be loyal to the principal’s priorities above their own. In other words, fiduciaries should not have any personal conflicts of interest, and they shouldn’t use their role to facilitate or promote their own interests.

Depending on the particulars of the fiduciary’s role, there are often additional duties, though the above two remain the foundation of fiduciary responsibilities.

The Committee for the Fiduciary Standard, formed in May 2009, seeks to “advocate for the authentic fiduciary standard as established under the Investment Advisers Act of 1940.” They created a standard fiduciary oath that principals are urged to ask their fiduciary advisors to sign and adhere to.

The oath is as follows:

“I believe in placing your best interests first. Therefore, I am proud to commit to the following five fiduciary principles:

The role of a fiduciary is both necessary and sacred. As such, the fiduciary should always act with great care and responsibility.